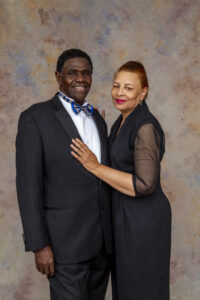 Pastor George P. Windley was born in Conway South Carolina. He was educated in the public schools of Horry County and graduated from Whittemore High School. He holds a Bachelor of Arts Degree and a Bachelor of Divinity from Morris College, Sumter, South Carolina. He did further studies at Colgate Divinity School, Rochester, New York and has completed five units of Clinical Pastoral Education. Pastor Windley has held positions as an instructor at Morris College School of Religion and Director of Men’s Residence Hall at Morris College. He also served in the United States Navy during the Vietnam conflict from 1969-1971.

In 1987, he was the founder of the Manhood/Womanhood Training. Over 2000 young people have received vital training. He also served as a commissioner for the National Baptist convention of America USA Inc. Prison Ministry.

Pastor Windley has received the following honors and awards:

He was the first African-American to be named Senior Chaplain with the South Carolina Department of Corrections. Pastor Windley has served as President of the Kingston Lake Congress of Christian Education, founder and former president of Clarendon County Ministerial Alliance,and Clarendon County’s Morris College Alumni Association’s President. He is a member of the Baptist E&M Convention of South Carolina and serves as Coordinator of Prison Ministry.

He also served as pastor of the following churches: Pilgrimford Baptist, Yemassee,SC; Saint Elizabeth Baptist, Aynor, SC; and Saint Peter Baptist Church, Burgess, SC (Home Congregation). He is presently the Pastor of Ebenezer Missionary Baptist Church, Manning, South Carolina where he has been serving since 1978.

Reverend Windley’s scripture motto is “Seek ye first the Kingdom of God and His righteousness and all of these things shall be added unto you.” Matthew 6:33.